From The Escapists Wiki
(Redirected from Tower guards)
Jump to: navigation, search

Guards are a type of character in the game. They patrol the prison regularly to prevent escape attempts and otherwise maintain order. In the game, there are two kinds of guards; Prison Guards, which patrol the prison, and Tower Guards, which stand at top towers and will shoot at players if their Guard Heat is above 89. The Escapists 2 adds dogs and SWAT guards, and guards will attack at a heat of 80+ instead of 90+.

Exclusive to The Escapists 2, the Guard Dog has several behaviors that differentiate them from regular guards. they will raise your Heat to 100 if they sniff contraband. Weapons won't do anything against dogs. Note:dogs are unstoppable. If you beat up a guard with a guard dog, it will limit the amount of time you can access their inventory. After the medics have collected the guard, the dog will return back to the kennels. 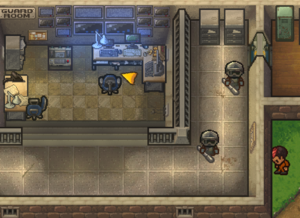 Where SWAT guards spend most of their life...

They are riot specialized guards that rest in the control room until the Lockdown state is triggered. They're better equipped than normal guards with Metallic Batons and High Defense Riot Armour. They won't be knocked out with a single hit from a Makeshift Stungun, the player must hit twice to knock out a SWAT guard. There is always two of them in every classic prison. Also, they act like guards (e.g: they report escape attempts when they found one and attack mischievous Inmates). Knocking one down is also the only way to obtain riot armor. Most control rooms contain the contraband desk which holds confiscated items and items that can be required for some favours. One of them always has a Yellow Key and the other a Red Key. You either need a weapon, armor, good stats, or a good strategy.

NOTE: Guards will attack you afterwards if you knock them out prior[they won’t attack you on mobile/console versions. This lasts until you escape from them chasing you.

Guard Outfit. If you are near guards while wearing it,

Infirmary Overalls, or a Civilian Outfit, the player's heat will go up rapidly, 3% at a time in the Escapists 1, but 1% in the Escapists 2. It can be used at night & day for less chance of detection but you will still be sent to solitary if you are seen after lights out. They will be confiscated.

Tower Guards are the last line of defense against escapists who get outside the wall. These guards will shoot at any players with a sufficiently high guard heat (90% and more, but 80% or more in the Escapists 2), dealing 20 (or 40) damage per shot, unaffected by the Plated Inmate Outfit or Plated POW outfit (is affected by armor in the Escapists 2). They go home during the night, which makes the only way to get past them unless you are wearing a Guard Outfit. In PC the tower guards will only be out from 6 am to 3pm. In the escapists 2 they go home at 1 AM