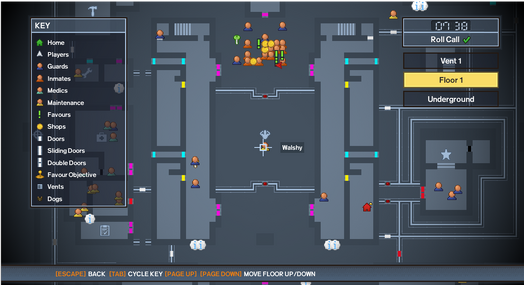 A map of Fort Tundra

Not to be confused with Prisons, also known as Maps.

The Map is a feature in The Escapists 2. It allows you to see who's selling items, has a favour for you, and where everyone is. It also gives you a representation of the prison's layout, showing floors, vents, and different types of doors (doors requiring Keys are marked in the Key's color, Multiplayer Doors are grayed out so they may be hard to see. White doors can be opened at any time.) Certain areas, such as the gym, mess hall, Solitary and Infirmary, to name a few, are marked with icons on the map. These icons display the area name when hovered over.

In the expanded map, you can switch between floors. This will not affect your location in the prison. The map does not pause the game when opened. NPC and player movements are displayed in real time, and the game will still run even if you can't see what is going on. A clock shows up in the same place as it does normally (top right) to tell you the time and routine. In the middle of the screen is a crosshair, and when targeted at an object, it displays its name. For example, in the map on the right, the crosshair is targeted at a maintenance worker, revealing his name is Walshy.

The map is accessed by 'expanding' the minimap. There will be a key down the left hand side, stating which symbol represents which type of NPC/player. The icons are as follows:

All of these icons show up on the minimap as well, with small yellow arrows showing up or down if they are on floors above or below you, respectively.

Additionally, there are icons not stated by the map legend: