From The Escapists Wiki
(Redirected from Intellect)
Jump to: navigation, search

The playable character in the game currently has 3 stats each of which has a maximum level of 100.

The values of these stats can be viewed for the player by pressing the P or 7 (or start on Xbox 360, left directional pad on PS4 and Xbox One) key. Moving the mouse cursor over the bars will show you their numeric value. Players stats are all automatically set to 30 when they first enter a prison. In the first game, the player's stats will gradually decrease over time, requiring the player to continue training in order to maintain them. When sent to solitary, all skills drop by about 10. A player's stats cannot drop below 10.

Health is the life in this game. If it drops to 0 you will get knocked out and sent to the Infirmary. The maximum health you can have is 50, which is achieved at 100 strength. Life will slowly drop every time you are sent to the infirmary. In TE2, Health is unaffected by strength and has a maximum of 100.

It is in TE1 the tiredness of the player (Fatigue), and his energy in TE2 (Stamina). When it is full in TE1 or empty (or nearly), the player becomes unable to perform any action that might tire it until having rested enough. Such actions include training and fighting. Actions that lower Fatigue or raise Stamina are sleeping in a bed, sitting, showering or consuming (foods and drinks).

Heat is what you get when you are not doing stuff properly. When your heat gets to about 90% guards will attack you on sight and if you are outside, you will be shot. The amount of heat you get from guards depends on the guards opinion about you. The higher a guards opinion is, the less heat you get from them, the lower the opinion, the more heat you get from guards. During a Lockdown, your heat blasts up to 99%. At 90% heat or higher, you cannot get a job. You also get heat if you are wearing a guards outfit when outside at night and day, but only about one or two per time guards see you. 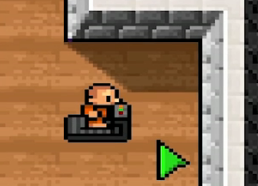 The treadmill, used to train the Speed stat.

Determines how often a character attacks when fighting. A higher Speed decreases the time between attacks, increasing the character's damage per second. To increase the character's speed, the player will have to either run on the treadmill, skip, use the yoga mat, or hit the speedbag. Note that speed doesn't affect the walking speed of the character. If the game is hacked in such a way where your character has much higher speed than is normally possible, (ie, 200) then it is possible to hit an opponent twice at the same time. If you have a good weapon, and/or similarly hacked strength, then this will usually one-shot any inmate or guard you whack. 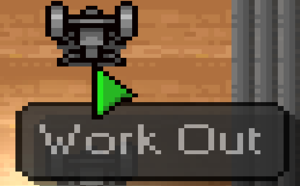 The weight-lifting bench, used to train the Strength stat.

Strength greatly increases your damage in fights and increases your overall health. It can be increased by working out on the weight lifting machines, workout mats or the punching bag in the prison workout area. It's a good idea to build up your strength so you can hit harder and live longer in fights. Like other stats, it will decrease over time and in Solitary, so it is important to continue working out constantly (~25 reps every day should be good) to keep in top condition. To fight better you should have high speed as well. Strength training will increase your Fatigue level quickly, forcing you to wait, shower, eat a meal at mealtime, use something that decreases fatigue, or sleep at lights out.

Intelligence is raised by using the computers or reading books. This stat is needed to be at certain levels for certain jobs and crafting certain items. This increases fatigue, or in The Escapists Console/Mobile and The Escapists 2, decreases stamina.

Money is the games' currency. It is obtained by favors, or by working, and can be used to buy from inmates and raise a guard or inmate's opinion.

The player itself does not have this stat on their profile screen. Rather, every other character in the game has a value for this, which denotes their opinion of the player. Characters that have a low opinion of the player are more likely to attack without being provoked, and will also snitch on the player if they catch them escaping. Guards with a low opinion will tear down posters and bedsheet curtains placed by the player. When opinion of an inmate reaches 80 or higher, you can recruit them by pressing "Q" while near them; however you can not recruit characters in mobile version. A recruited inmate will attack any inmate or guard that either you target, or that attacks the player.