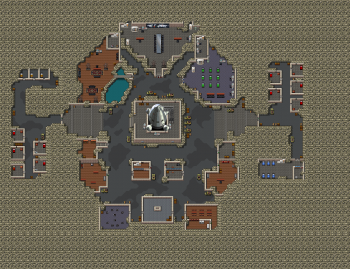 Duct Tapes Are Forever is one of the DLCs from the game The Escapists. It is James-Bond themed (unofficially) and it asks you to plot your escape from a supervillain's underground lair. It was released on November 3, 2015 and costs £1 / $3.99 / €3.99

‘Duct Tapes Are Forever’ is all new downloadable content which transports The Escapists to the secret world of spies, villains and tuxedos. Take control of a tuxedo-clad superspy as you find yourself trapped in an evil villain’s lair, guarded by henchmen.

These items are used to launch the rocket and escape.

To escape the lair, you will need:

Sturdy Pickaxe is highly recommended for efficiency, but a lightweight one can work too)

The first thing to remember about the villain's lair, is that there are absolutely no tower guards. As such, you will not get shot, no matter how much heat you have on you. You can also chip walls at any time during the day without getting shot. Start by buying a

Guard Outfit first. Each cell (Excluding your own) has a camera inside it. Dressing up as a guard or henchman will allow you to search another spy's desk without the camera getting suspicious. If you can knock out a henchman and take his outfit beforehand however, the guard outfit will be inferior. get a

Fake Shoe from a desk if you can. It works like a

Contraband Pouch, except it does not get confiscated if you get knocked out.

The janitor job you start off with can help towards getting some starter money, but some of the puddles needed to complete your quota can spawn around the rocket, which is a restricted area - you'll be attacked immediately if you get seen there, even if you're just trying to do your job. This makes the janitor job an absolute pain at times, so try to get a better job as soon as possible. The metalshop and woodshop jobs both have a crate inside them with an important item each -

Sticky Tape, respectively. These are not considered contraband, and so you can take them as you please. If you cannot be bothered jumping between both jobs, you can just use a pickaxe to chip through a portion of the wall and loot the crate. Just remember to replace the wall block again after you're done.

Once you have acquired both of these items one way or another, it's time to move onto the next item - the keycard. This is located inside the henchman's quarters to the northeast of the lair. The door however, has a blue key lock. This means you must be a henchman. The guard outfit is not sufficient for this, even though henchmen will be fooled by it. As such, you need to acquire a henchman outfit by knocking out a henchman. Ideally, try to find the fourth henchman on the roster, as he has the Staff Key. You'll be needing a copy of that next. If you're having trouble figuring out the fourth henchman, wait until evening rollcall, when the henchmen turn on their flashlights. And then go and find a henchman who has a flashlight, but is not at rollcall. There's a 50% chance he has the Staff Key - the other 50% is the Work Key. Either way, once you've identified him, wait for him to cross over into your cell block, and then make your move. You can make a

Cup of Molten Chocolate to instantly knock him out. You can also find a

Sharp Tea Tray in another spy's desk, and they will all serve as instant knockout items, too. Once he's down, take his henchman uniform. He may also have some

Memoir Tapes on him. Take those as well, as they are a necessary component for the

Voice Recording. Finally, take his Staff Key and make a copy of it, but remember to give the staff key back before he wakes up again.

Now you have a copy of the staff key, this means the next two items can be acquired. Firstly, grab your plastic staff key and don your new henchman uniform (Remember to use a fake shoe or contraband pouch to get past the contraband detector safely), then enter the henchman's quarters. This is a restricted area. As such, you will be instantly recognized by any henchmen in here. The henchman outfit isn't for tricking them, it's simply for getting through the blue door. There will be a crate to the far right in this room. The

Keycard is inside it. Take it, and then get out as soon as possible. But you're not finished, yet. The doors to the north require a staff key, which you have a copy of. Enter it (Again, it's a restricted area and you'll be identified by any henchmen inside) and head to the northwest of this room, where a crate sits. In here is a

The last part is possibly the hardest and riskiest part. You have to get into the villain's office and then into a room that has no door. This is where the last crate is kept. A good method to accomplishing this, is to head to the northwest of the main area, between the meeting room and the villain's office there is a little passage where you can see the crate. Be warned that henchmen will be suspicious of you lurking here, and they will attack if they see you there. When the coast is clear, use a chipping tool to weaken the wall leading into the office, but do not destroy it yet. Go and get a

Tube of Toothpaste, some

Shaving Cream, or a

Roll of Duct Tape first. When you have one of those and you're ready, use a

Lightweight Pickaxe (If you used the lightweight pickaxe to chip the walls into the metalshop or woodshop, you will need to upgrade it into a

Sturdy Pickaxe, instead) to break through the wall. Replace the wall block once you're through the wall. There is a camera near the wall that will call for henchmen, if it sees you. Disrupt its vision with your chosen item, then walk around to the crevice at the top and chip through the wall there. This should allow you to reach the crate at last. Inside is a

Dirty Glass that the villain has used. Take it, and then replace the wall block leading into that section. Then find the piece of wall you previously chipped through to get inside (It will be at 10%) and chip through it again. Replace the wall block once more after you're through. Then return to your cell and combine the dirty glass, sticky tape, and a

Tub of Talcum Powder to create a

Weak Fingerprint. Craft that with the blue putty from the metalshop crate to get the

Fake Fingerprint, the final piece for your escape.

Once you have the fake fingerprint, the voice recording, and the keycard, you can escape at any time you wish. If you choose to do it at night time however, you will need to create a